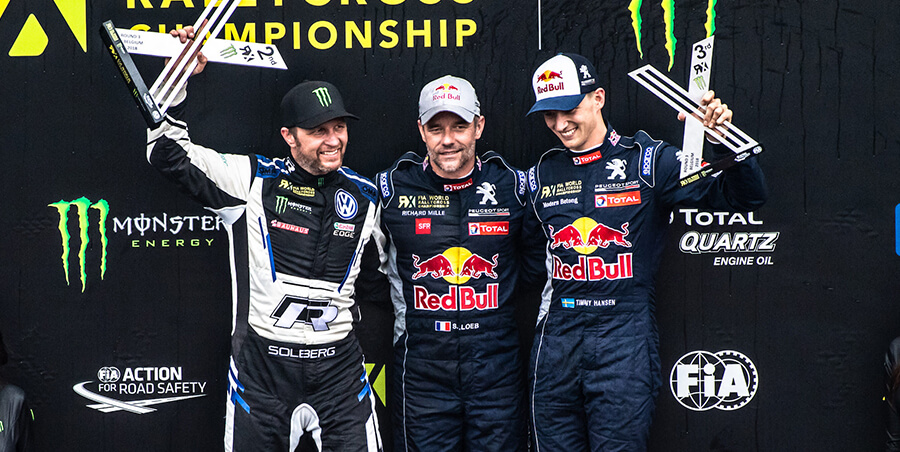 Despite the gloomy weather, the show was very colourful on the track of the Jules Tacheny circuit in Mettet.

Supercar World RX: Two fiery semi-finals! In the first semi-final, the two VWs of Kristofferson and Solberg were the fastest, ahead of the Audi of Ekström. In the second semi-final, Sébastien Loeb reigned supreme. He was ahead of an incredible Andreas Bakkerud (Audi S1), who was penalised by a false start and therefore had to pass through the Joker Lap twice, but was still second ahead of Peugeot driver Timmy Hansen. And so here are the three manufacturers officially involved in the final with their two cars.

At the start, Sébastien Loeb was the most skilful and led the pack after a hectic first corner. The French driver was not to be caught up again, despite some good resistance from Petter Solberg. Behind him, Timmy Hansen, who had started last, made a fantastic comeback and finished on the third step of the podium. Ekström, Kristofferson and Bakkerud finished in this order in a final that will remain in the memories.

Touring Car : Steve Volders thrilled the Belgian public until the end: the driver of the Ford Fiesta n°77 fought for the victory until the last lap, finally beaten by the Swede Fredrik Salsten (DS3). Another Swede, Daniel Lundh (Volvo C30) completed the podium…
RX2: Guillaume De Ridder was eliminated in the first corner of his semi-final after a contact that broke his steering column. This was not the start of the season that the Belgian rider had hoped for. In the final, the favourite, Lithuanian Gryazin, was pushed against the tyre wall in the first corner by Kalliomaki, who was given a black flag. The place was then free for the Norwegian Gundersen who won in front of his two compatriots Evjen and Krogstad.
Supercar Euro RX: A crazy final in Supercar Euro RX with a fight to the death, to the 100th of a second, between the 6 finalists. It is the Swede Anton Marklund who finally emerges ahead of the hot Lithuanian Reinis Nittis and a Cyril Raymond who was a bit trapped at the start and who tried everything… but in vain.